Working for an MSP, I have the opportunity to interface with a large number different clients and vendors. A few months ago a vendor contacted me on behalf of a mutual client, stating they "updated their scripts" and now their application, wasn't working for our mutual client. They had tested in their (the vendors) test environment, and determined the clients firewall (of which I was responsible), must be blocking the traffic.

I tested with the client and saw the traffic being allowed through; so I informed the client I'd work directly with the vendor and provide them with updates.

During testing with the vendor, I could see two way traffic being allowed thru the firewall; however, the vendor reported they weren't receiving any traffic from the client.

This caused me great confusion, and requested we run a Packet Capture on both sides to compare. Which quickly allowed me to determine that traffic was being sent / received on both sides. Not only that, all traffic was making it thru in a timely manner, but still the SFTP uploads and webpage calls were failing.

With the pcaps determining that bi-directional traffic was allowed; they agreed to dig into the pcaps with me. And we quickly determined the clients server was attempting to negotiate TLS 1.0, which had been depreciated on the vendors servers, in favor of TLS 1.2, as part of the "script updates".

A quick installation of the TLS 1.2 libraries on the clients servers resolved the issue. This experience has made me much quicker to run packet captures to check for obvious issues, rather than pushing them off as a last resort!
Posted by Samuel Dye at 6:30 AM No comments:

In part 1, I stated that CoS doesn't refer to just layer 2 tagging of frames, as is commonly believed. Rather, CoS is the implementation of QoS principles enacted at various layers of the OSI model.

CoS facilitates the prioritization of traffic flows over a common path.

IEEE 802.1p/Q at the Ethernet layer and DSCP at the IP layer are some of the most commonly utilized standards-based CoS mechanisms.

Layer 3 method of CoS: DSCP - Differentiated Services or DiffServ

An example configuration string from a Brocade / Ruckus switch:

Posted by Samuel Dye at 4:43 PM No comments:

Had a unique situation recently with a client whose IMAP Proxy would go offline after a reboot. All the services were running, and Event Logs were less than helpful to determine root cause. So while I wait for Microsoft support to check into and resolve the root cause (haha), I wrote a basic script to to resolve preventable outages due to this bug.

The script is written to import the Exchange Management Module.

Then check the health and status of the IMAP Proxy.

If the health and status of the IMAP Proxy is NOT online and healthy, it triggers a condition to start the service.

If the health and status of the IMAP Proxy IS online and healthy, it exits the script.

This script is scheduled via Task Manager to run on startup, after a 15 minute delay (to allow normal Exchange services a chance to start).


link to code on github
Posted by Samuel Dye at 7:29 AM No comments:

networking: CoS vs. QoS

NOT a layer 2 vs layer 3 differentiation.

NOT a guarantee for traffic (dependent upon each hop respecting the request). 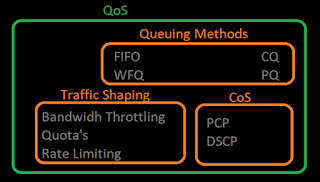 QoS - Quality of Service: an umbrella term which covers the use of features such as traffic policy, shaping, and advanced queuing mechanisms.

Posted by Samuel Dye at 7:32 AM No comments: